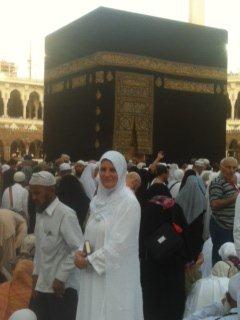 Last week I arrived back from a unique teaching experience in Jeddah Saudi Arabia. I would like to share my experiences with you especially as the place I visited is one where tourism barely exists unless you are a Muslim on a pilgrimage to Mecca.

My client Dr Alaa Nasief found me by chance whilst visiting Durban South Africa on a business trip with her husband. Over the following months Dr Alaa Nasief returned for several other life Alignment sessions flying especially from Saudi Arabia for her appointments. Soon it was agreed that if a visa could be obtained I would go to teach in Jeddah.

I departed April 1st 2012 on Saudi Airlines leaving behind a few concerned friends about visiting this country with my blonde hair and Princess Diana look alike. My husband on the other hand was joking that perhaps he could sell me to a rich sheik!  In readiness for my trip I emailed a photo of myself dressed appropriately covered from head to toe with a beautiful beaded Abaya. A positive reply came back from a male Muslim student that I taught in Mauritius.  I was worth at least a 100 camels!

Some newer students and practitioners may be asking, ‘what is the best way to promote Life Alignment’? We know that most people who want to learn this system of healing do so because they have experienced an amazing session and then ask, ‘how can I learn this technique’? They typically want to help heal themselves, family and friends. Others could be professional people in health care such as the two specialized medical Doctors from Mauritius that have progressed to module 2 level of Life Alignment earlier this year. They along with many others with varied backgrounds wish to integrate the healing in with whatever else it is they have been trained to do. It is totally complementary to any other health practice and adds value to what they practice.

The best way to introduce Life Alignment is to give a talk and Demo if possible. (Don’t worry if this scares you, it did me in the beginning but now I am more confident) Author Susan Jeffers says, ‘feel the fear and do it anyway’!

The day after arriving in Jeddah I gave my first talk to introduce Life Alignment in a trendy coffee shop. Due to some restrictions I was not able to do a group healing demonstration but nevertheless the talk was a success and the first workshop was well attended with 9 students.  A second talk at the same venue enabled us to register a further 8 students for the second Body Spin workshop.  Private Sessions were also in great demand so I was kept extremely busy. The few students that were able to attend Module 1 all agreed how everything they learnt fell into place after this module. This is because once you have learnt the foundation in Body Spin the rest flows much easier. 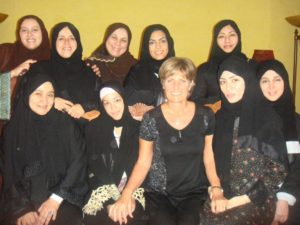 The Great Holy Mosque in Mecca, it is the largest mosque in the Islamic world. This is the birth place of the prophet Muhammad and founder of the Islamic religion.  Normally one is not allowed to visit if you are not of the Islamic faith so indeed I was very privilege to be invited there! I read out loud a special prayer prior to enetering the Mosque.  It was still dark when we arrived at 5am in the morning just as the first prayer of the day was starting.  I was touched by the peaceful energy and devotion of prayer to God by so many people at the same time. 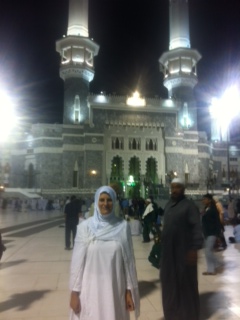 We walked through the Mosque and came to an outside area where there is  a cube- shaped stone building called the Ka’bah.  God instructed the prophet Abraham and his son Ishmael to build the Ka’bah over 4000 years ago. Angel Gabriel showed Abraham where to build the shrine which was built from the stones of 5 scared mountains. Muslims from around the world Pilgrimage to this place at least once in their life time if they have the financial means.  Everyone walks around seven times anti clockwise and offers their prayers or asks for help and healing.

At one stage prior to entering the Mosque I felt as though I needed to be supported as the energy was making me feel unsteady on my feet. I had the same feeling once inside and noted that the energy was on straight diagonal line. I am not sure yet what this was representing. As a non Muslim I have been told visiting this place is considered to be God’s will. I am surely blessed!

There is a large black stone that is guarded in one corner of the Ka’bah.  It is almost impossible to get close to it as the crowd thickens to such great density in order to try and touch it so they can be healed of their sins. It is said that the stone was originally a great white sapphire crystal which gradually turned black with peoples touch. The origin of the crystal is uncertain but it is believed to come from God above. It has also been suggested it could be a meteorite.  It would have been interesting to have done some dowsing to find out!

Finally this news letter would not be complete without mentioning the Holy water from the Zam Zam well, it has been said that it is the best water on earth. It has been flowing in this area in great abundance for 4000 years. It has never dried up. It has a very high mineral concentrate and is Alkaline based 7.9 -8 PH. The calcium content is 200mg per litre.  It is believed to heal illness and bring spiritual comfort. I drank this water from its source and have to tell you it was the sweetest, softest tasting velvety water. I checked it out with my pendulum first of course and it had a strong clockwise spin.

My deep gratitude and thanks is extended to all that hold a supportive space for our teaching and healing sessions. Not only are we healing ourselves every time we heal but we are creating an informational field of love heart centered consciousness to many others. This is very inspiring knowing we are helping to co-create a better world!